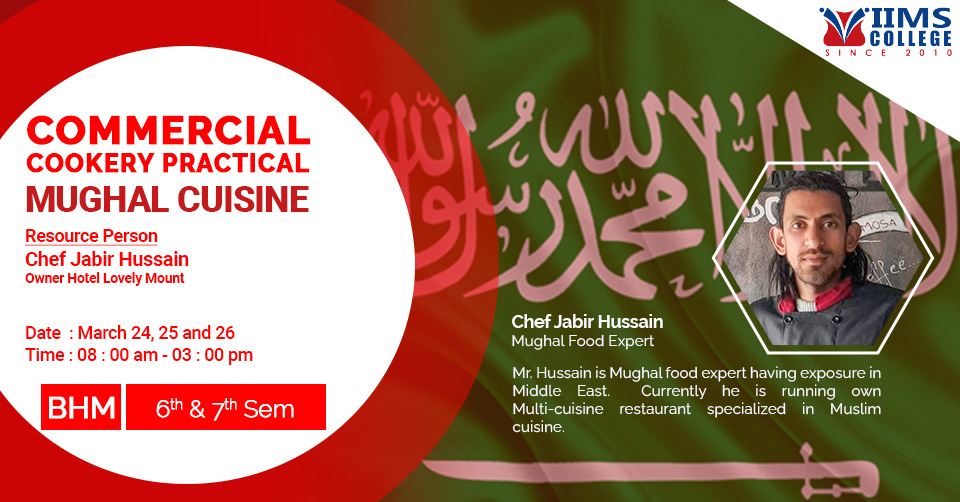 Experience in Commercial Cookery practical on Mugal Cuisine at IIMS

Mughal cuisine was prepared in the kitchen of IIMS College on 25th March 2021. Mr. Jabir Hussain being a specialized chef on the day. In this cuisine, we had prepared Murg Dum Biryani Raita. In this cuisine, we had a short and important biffing session about Murg Dum Biryani Raita. In the briefing session, we got to know about the dish and how it originated or was created. We also learned little about the Mugal Cuisine itself in this practical session. The process of making Murg Dum Biryani is very easy which is explained in the following paragraph.

At first, we took a long grain of rice (biryani rice) and washed it properly then soak it by adding garam masala, green chilies, oil, salt, mint leaves. We soak the rice until the texture of the rice is soft. We peel and cut every vegetable available in the kitchen then cut the onions. Then the garlic and ginger were finely chopped. Then we take a walk and heat the oil and fry the sliced onion until it turns golden brown. After that, we took a mixing bowl and added fried onions, chopped ginger, and garlic, olive oil, curd, spices, garam masala, and mixed it well. Then we add vinegar and cut chicken pieces and keep aside for at least 1 hour. While the chicken is marinating, we heat the soaked rice. After the water is boiled and the rice is half cooked then we simmer the heat. After that, we drain all the water of the rice and spread the rice evenly on the table, and let it cool. For the gravy we heat oil then we add garam masala, ginger garlic, onion and fry until it turns brown. Then we added sliced tomatoes, curry leaves, mint and cooked them well. After the curry was ready, we added marinated chicken to the gravy mixture. Then we added curd and cooked until the oil started floating. Then after the gravy is cooked, we turn off the heat and started our final and most important preparation. For the final preparation, we took a thick-based pan that had a lid and polished it with ghee. Then we started the layering process by adding chicken gravy in the first layer then added the second layer of rice then again, we added

the layer of left-over gravy then after that, we added the fourth and final layer of rice then we had spread fried onions, fresh mint, and dry fruits. After the final layer, we had made the mixture of milk and saffron then we spread the mixture in the final layer. We also spread rose water and red food color on the top layer and it was finally wrapped with a plastic bag for steaming and closed the lid. The Murg Dum Biryani is cooked in low heat for 20 minutes. Then the Murg Dum Biryani is ready to serve.

As an accompaniment, raita was served with Murg Dum Biryani. Raita is basically prepared with fresh curd. The curd is firstly whisked properly and hence mint leaves, chopped onions are added to it. It is then whisked properly with adding seasoning as per the taste.