What Is Commercial Cookery – Get Groomed With The Best at IIMS College? 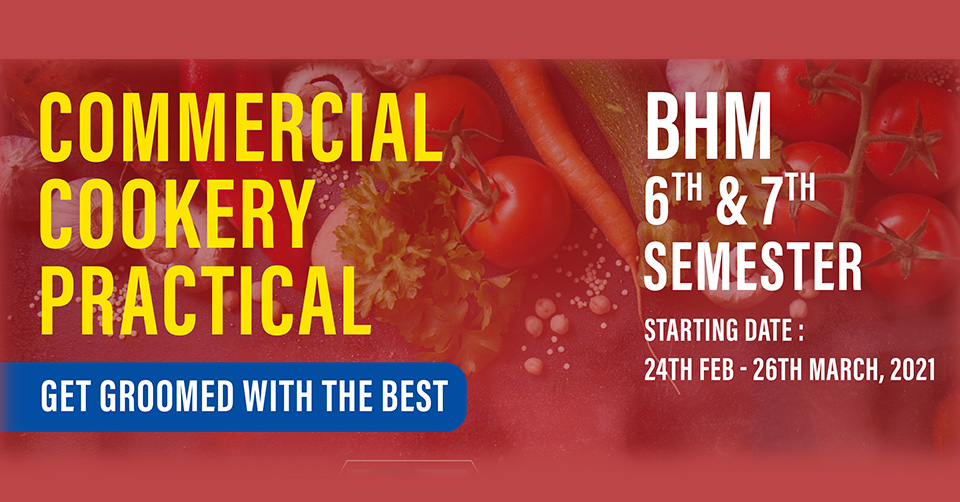 So What Is Commercial Cookery course All About?
It means taking your love for cooking to another level altogether on a commercial scale. Making it your profession and getting paid for doing what you enjoy the most.

At IIMS, we are constantly keeping ahead to ensure future-proof our students. In the same process, IIMS is organizing ‘Commercial Cookery Practical’ from 24th February 2021 to 26th March 2021 introducing Italian, Arabian, Chinese, Korean, and Mughal Cuisine’s Practical Cooking Sessions at IIMS College to ensure our students are well updated on the current and upcoming trends and hence they are well equipped to embrace the challenges of the 4th Industrial Revolution.

Italian Cuisine
Italian Cuisine is a Mediterranean cuisine consisting of the ingredients, recipes, and cooking techniques developed across the Italian Peninsula since antiquity, and later spread around the world together with waves of Italian diaspora.

Italian cuisine is generally characterized by its simplicity, with many dishes having only two to four main ingredients. Italian cooks rely chiefly on the quality of the ingredients rather than on elaborate preparation. Ingredients and dishes vary by region. Many dishes that were once regional have proliferated with variations throughout the country.

Arabian Cuisine
Essential to any cooking in the Arab world is the concept of hospitality and generosity. Meals are generally large family affairs, with much sharing and a great deal of warmth over the dinner table. Formal dinners and celebrations generally involve large quantities of lamb, and every occasion entails large quantities of Arabic coffee or Arabic tea.

The cuisines are often centuries old and reflect the culture of great trading in spices, herbs, and foods. These cuisines have been influenced by the climate, cultivating possibilities, as well as trading possibilities.

Chinese Cuisine
Chinese cuisines are an important part of Chinese culture, which includes cuisines originating from the diverse regions of China as well as from Overseas Chinese who have settled in other parts of the world. Because of the Chinese diaspora and historical power of the country, Chinese cuisines have influenced many other cuisines in Asia, with modifications made to cater to local palates.

Color, smell, and taste are the three traditional aspects used to describe Chinese food, as well as the meaning, appearance, and nutrition of the food. Cooking should be appraised concerning the ingredients used, knifework, cooking time, and seasoning.

Korean cuisine is largely based on rice, vegetables, and (at least in the South) meats. Many regional dishes have become national, and dishes that were once regional have proliferated in different variations across the country. Korean royal court cuisine once brought all of the unique regional specialties together for the royal family. Foods are regulated by Korean cultural etiquette.

Mughal Cuisine
Mughal Cuisine consists of dishes developed in the medieval Indo-Persian cultural centers of the Mughal Empire. It represents a combination of the cuisine of the Indian subcontinent with the cooking styles and recipes of Central Asian and Iranian cuisine.

The tastes of Mughlai cuisine vary from extremely mild to spicy and are often associated with a distinctive aroma and the taste of ground and whole spices. A Mughlai course is an elaborate buffet of main course dishes with a variety of accompaniments.

The hospitality, tourism, and culinary arts sectors are growing at an exponential pace and IIMS prides itself on matching every stride of this growth. With its dynamic programs and outlook, it is obvious why IIMS leads the way for hospitality education in Nepal.