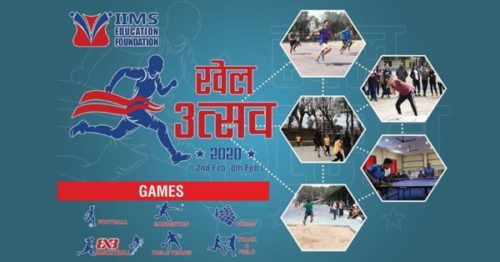 IIMS unequivocally acknowledges that sports themselves are an imperative part of study in student’s life for which this significant event KHEL UTSAV 2020 was organized for all the beloved students, commencing from 2nd February and closing on 24th February. This event is intended to keep competitive sports at the heart of students and provide them with the opportunity to contend and achieve their personal best. IIMS truly believes that when students are physically and mentally fit, they will achieve more academically and thus to ensure students have a holistic approach which transforms them into multifaceted professionals and individuals.

On the primary day of KHEL UTSAV 2020, we had the game of masterminds i.e. the chess competition, in which we had 54 participants from all the faculties. The challenge was neck to neck between all the members while the finals was one of a heck.

Simultaneously, table tennis round was another hyping sport conducted inside the IIMS premises. Altogether 80 students participated in this competition encompassing all the faculties. Table tennis was played in a two day time frame. The game for badminton was held in three different venues on different days. Firstly, badminton was played in Dasrath Rangashala, secondly inside college premises and finally at Tribhuwan Covered Hall where 80 students participated for the title of badminton champions.

Eventually, KHEL UTSAV 2020 concluded on 24th February leaving everybody with incredible encounters, some of win and some of misfortune, however it have shown everybody something in their lives. Winning and losing remains the subsequent thing, what truly matter is taking part, giving a try and pushing our points of confinement to accomplish what we can be in our future undertakings. On this concluding day, sports such as Tug-O-War, long jump, races and shot put were scheduled as athletic games at Lagankhel Army Ground.

The success of this event lies on the hands of faculties, staffs and students for all of their enthusiasm, hard work and preparation for which IIMS would heartily thank all the beloved ones and wish for more successful events in future endeavors.

What Is Commercial Cookery – Get Groomed With The Best at IIMS College?

Things To Know About An MBA In Nepal

What it’s like to be an MBA Graduate in Nepal?

Bachelor of IT in Nepal